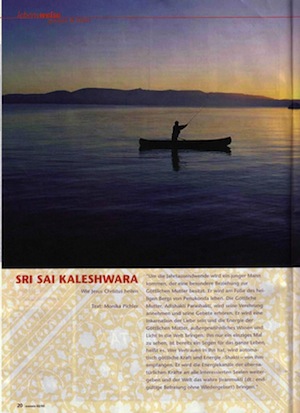 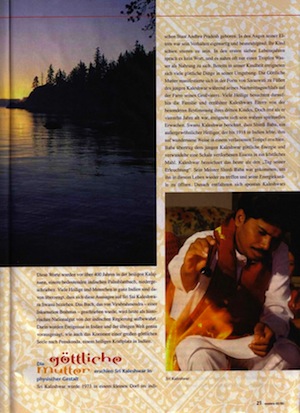 A young man will come—at the turn of this millennium—with a special relationship to Mother Divine. He will live by the holy mountain in Penukonda. The Mother, Adishakti Parashakti, will receive his worship and answer his prayers. He will be an incarnation of love who will bring Her energy to the world. He will come to take care of the planet and bring extraordinary knowledge and light. To see him once will be a blessing for a person’s whole lifetime. If you have faith in him, you will automatically receive the shakti from him. He will spread the supernatural power channels to every soul who is interested, and will bring Jivanmukti to the world.

These words were written over 400 years ago in a sacred palm leaf book called The Kalajana. Many saints and people throughout India believe they refer to Sri Kaleshwar. This manuscript, written by Virabrahmhendra––a great saint and incarnation of Brahma––is a national treasure of India and is held in trust by the Indian government. It accurately predicted world events—in India and abroad—as well as the coming of a great Divine soul to Penukonda, a sacred power spot in southern India.

Mother Divine Appeared to Sri Kaleshwar in Her Physical Form

Sri Kaleshwar was born in 1973 in a small village in the Indian state of Andhra Pradesh. As a young child, his behavior was ‘peculiar’ and worrying to his parents. He appeared dumb; he didn’t talk for the first seven years of his life and would often take only a drop of water on his fingertip as sustenance. Many divine occurrences occurred around him. Mother Divine in the form of the Goddess Saraswati, manifested at the feet of the sleeping boy during an afternoon nap at his grandfather’s farm. Many saints visited the family’s house telling Kaleshwar’s parents about the special destiny of their third child. But it was not until he was 14 years old that Kaleshwar’s real spiritual awakening occurred. Sri Kaleshwar reports that Shirdi Baba, the extraordinary saint who died in 1918, miraculously appeared to him in an abandoned temple. Baba transmitted divine energy to Kaleshwar and changed a bowl of rotting food into a delicious meal for him to eat. Kaleshwar calls this his “enlightenment day”. His master, Shirdi Baba, had come to meet him again in this lifetime to awaken his divine energy channels. After this, Kaleshwar’s miraculous powers and healing abilities spontaneously arose and his work for the world began.

For the next decade, he practiced intense sadhana under Shirdi Baba’s guidance. Shirdi Baba led him to ancient palm leaf manuscripts written by the maharishis that had received this information directly from Mother Divine and the angels. He traveled across India, visiting ancient power spots and meeting with hundreds of powerful saints and discussing his research with them. He did the processes prescribed in the manuscripts and experienced the results. These practices were not for his enlightenment, or for the attainment of supernatural powers—these had already been attained in other lifetimes and were merely being reawakened. These processes instead were to research and test the sadhanas he was to give his students and to win specific divine blessings from the Mother. He had innumerable experiences that came as the fruit of these practices: Mother Divine, Shiva, and divine souls physically appeared offering him boons. He asked for boons for the well being of mankind, and especially for the success of his students. This was a demonstration of the power of doing the correct austerities . “It doesn’t matter what I teach. It doesn’t matter what you believe. What you practice is important. The right direction brings the results,” he says. These practices done with an open heart, surrender and dedication will bring God to you. These are the “sacred formulas” given in the palm leaf books that reveal how to use certain powerful mantras and yantras to directly experience the Divine energy.

Bringing this knowledge to the world is the focus of his life. But Sri Kaleshwar does not consider this knowledge to be his own. He says, “It’s not my knowledge. It’s the knowledge of the supernatural saints. These are the kind of formulas we have: knowledge from 3,000 years back. This is the first time it’s being brought out. It’s completely the first time. Now it can be used. My mission, my ambition, is to grow the knowledge fast. I am giving formulas of the supernatural energies. They are a short cut to get Divine Grace in a short time. I want to spread this knowledge. Then everybody can smell the fragrance of God.”

Previously these manuscripts were mostly hidden from the world. They had been handed down through the lineages of saints in India who protected and kept them secret. Only a few were given access to them. But Sri Kaleshwar says the time has come when there are people responsible enough to utilize this knowledge to help the world in this time of greatest need. The information in these manuscripts is the cornerstone of what Sri Kaleshwar is bringing to the world––it is the “extraordinary knowledge” that The Kalajana predicted he would bring. It contains the keys to unlocking a person’s hidden potential and developing their personal relationship with God, and understanding the mechanisms of Creation.

Sri Kaleshwar says that although there is so much darkness and negativity in our age, there is also the greatest opportunity to become enlightened very quickly. He says, “The real purpose of life is to know the truth of why we’re here. Before you drop your body, try to see the reality. Do whatever you want and at the same time think, what is the purpose that you came here. What is the life message you want to give the planet? Each soul has to be a great scientist, a soul scientist. You have to discover something then give your own style of message. We all came from that greatness but we are ignoring our greatness. We feel we are in darkness. No way. There’s an unbelievably huge light hidden in us. Through certain processes you have to bring that energy up then everything will be possible for you to recognize yourself.”

Healing like Jesus Christ: Recognizing the Inner Mechanism of Miracles

Sri Kaleshwar says that this is the first time in spiritual history that this kind of energy, which he calls miracle energy, is being made available to the many. This means not only receiving miracle energy by doing these practices but seeing for ourselves with our own eyes the inner mechanism of miracles—seeing how a supernatural occurrence can be created in the natural world. To understand God, we must understand God’s energy. God’s energy cannot be separated from miracle energy. “God is miracle energy. God is supernatural ability. Without miracle energy, we can’t call Him God,” he says. It is seeing how miracle energy works; how healing happens––the flow of energy and its effect––direct action to reaction. Through these ancient practices, Sri Kaleshwar’s students gain the ability to experience and absorb the highest cosmic energies. By bringing up a person’s own energy it becomes possible to connect to Mother Divine and see Her with our own eyes. Now the miraculous process of connecting to Mother Divine is being revealed to all who open heartedly seek it and who are willing to do the spiritual practice that will bring this divine blessing. Sri Kaleshwar says he offered his life to Mother Divine to prepare and give out the inner mechanism of miracles. This is why hundreds of his students have had experiences with Mother Divine and have received Her boons and blessings. He says, “No master for 2,000 years has given a guarantee to connect to the real Mother in physical form, to receive amazing healing abilities and enlightenment channels (from Her).”

Sri Ramakrishna Paramahamsa, the great saint of Dakshineswar, performed these sadhanas because he longed to see Mahakali, a form of Mother Divine. Through the same processes, he was able to win a channel so that he was able to see and talk with Her everyday. It is Sri Kaleshwar’s personal feeling that Ramakrishna Paramahamsa gave these practices to his students but they did not know how to follow the guidelines properly and so did not get the results. It is said that even his foremost disciple, Swami Vivekananda, only saw Mother Divine’s toe. Sri Kaleshwar said, “We are not seeing any of Paramahamsa’s students leading the globe today. We have to wait and see the results. What will happen?” Because of the boons granted by the Mother Herself to Sri Kaleshwar, his students would be able to have this miraculous ability of connecting to Her. Once a person connects to Mother Divine, especially the form of Mahakali, the very air they breathe would become sanctified. They would purify everything around them. The Mother’s energy would flow through them and they could bless the world with Her shakti . Sri Kaleshwar says that it is through shakti that a person can help the world and give an experience of satchitananda.

The Religion of Love

The ancient knowledge––‘Science of the Soul’––is taught in Penukonda, at Sri Kaleshwar’s ashram in Southern India. The knowledge and practices are the tools by which a soul can realize itself, achieve miraculous abilities and become a pourna avatar , a dazzling, enlightened soul whose life is an inspiring message to the planet. Such a person understands the mystery of life and death, can make impossible things possible, and can give others the direct experience of reality. Sri Kaleshwar says, “Every soul has the potential to reach the level of a Shirdi Baba or Jesus and contribute amazing things to the world. Everybody can do it. That’s my golden statement. That’s my mission. Everybody’s equal. What did Jesus Christ say? ‘Who really trusts in me—they will become more powerful than myself.’ That means all his students.”

Sri Kaleshwar feels the majority of saints were not able to take students to this level of mastery because they don’t know how to give the proper guidelines to these practices in order to achieve success. It is his deepest desire to leave a legacy of hundreds of spiritual masters who in turn will continue to create a lineage of many more spiritual masters. He has asked Mother Divine for the boon that his students will be even greater than him. When asked what he feels is his greatest gift to the world, he says humbly, “My students.”
He says he is not here to create a new religion. He is teaching the divine tradition that doesn’t belong to any one religion. He says, “Religions are different, languages are different, but the language of the heart is the same. My language is the language of the heart. God only has one organization and that’s love. I’m going to that point, only there. The love organization—the religion of love.”

Monika has studied with Sri Kaleshwar in India for the past nine years. She is an author, healer, and teacher of the ancient knowledge revealed by Sri Kaleshwar.

To visit the ashram, prior written permission is required as unexpected guests cannot be accommodated. The application form can be found on the website.