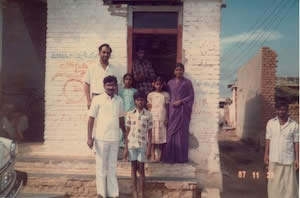 Just then, the old man revealed certain knowledge to Kaleshwar. Afterwards, he tapped his begging bowl three times and the once ‘rotten’ food was then steaming hot and its delicious aroma filled the small temple.

Kaleshwar liked to do his schoolwork in seclusion. One day, while he was studying for exams in an abandoned temple, he noticed an old man sitting in one corner watching him. The man had a beard, a cloth wrapped around his head, a begging bowl and a stick. The old man asked Kaleshwar for coins, which he gave him. The next day, when the boy returned to study, the old man was there, once again, begging coins. On the third day, when asked for coins Kaleshwar said that he had no change. However, the old man replied, “You have 50 rupees with you.” The boy reached into his pocket and immediately felt surprised. He had forgotten he had a 50-rupee note. Puzzled, he said, “How did you know that?”

Then, the old man offered the young boy rotten food from his begging bowl.

Kaleshwar responded with a grimace, “Why are you eating this food? That’s why your health is so bad. I’ll bring food from the house, don’t worry.” The old man looked at him with tears in his eyes.

Just then, the old man revealed certain knowledge to Kaleshwar. Afterwards, he tapped his begging bowl three times and the once ‘rotten’ food was then steaming hot and its delicious aroma filled the small temple.

Kaleshwar was amazed—and afraid. “Who are you? Why are you doing this magic?”

“I am Shirdi Baba. Just taste my food a little to see if you like it,” he said, putting a spoonful in Kaleshwar’s hand. It tasted incredibly delicious. Shirdi Baba kept putting spoonfuls of food in Kaleshwar’s hand, which he gladly ate. Kaleshwar ate a full meal then went to wash his hands at the nearby water tap. He was gone only a couple of minutes, but when he returned, Shirdi Baba was nowhere to be found. From where he stood, Kaleshwar could see a great distance in every direction; Shirdi Baba had mysteriously disappeared—leaving no trace except his footprints in the dust. But, he had left a gift for Kaleshwar: there in the corner, leaning against the temple wall, was Shirdi Baba’s stick. Kaleshwar has kept Baba’s stick to this day.

Extremely confused by Shirdi Baba’s ‘miraculous’ disappearance, Kaleshwar’s heart was racing. He went home and recounted the story to his mother. His mother listened, but told him it was probably just a dream. “Oh, you’re always being silly,” she said to him.

He stuck out his hand. “You see this stick?” Kaleshwar said. It was no dream. 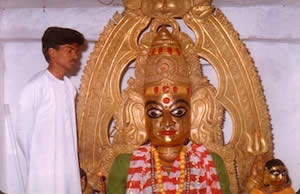 After that, Kaleshwar began to see Shirdi Baba in his dreams and hear his voice. “Why are you so afraid? I’m your Grandfather. I’m a Grandfather to all the people. You’re a global person. You’re a global person.” Shirdi Baba told him that he had important spiritual work to do in the world and invited him to come to Shirdi, the town where Baba lived when he was alive and the site of his samadhi tomb—now one of the holiest pilgrimage shrines in India.

With great resolve, Kaleshwar begged his parents’ permission to go to Shirdi. They were very much against it. After days of arguments, during which he also went on a hunger strike, he was allowed to travel 800 miles to the small village where Baba had lived. When he placed his head on Baba’s samadhi (tomb) he clearly heard Baba’s voice, “I have been waiting for you. Now is the right time.” Soon after, the young Kaleshwar began displaying miraculous powers and healing abilities. Shirdi Baba had opened his divine channels. His true dharma, his spiritual work, had begun. He was fourteen years old.