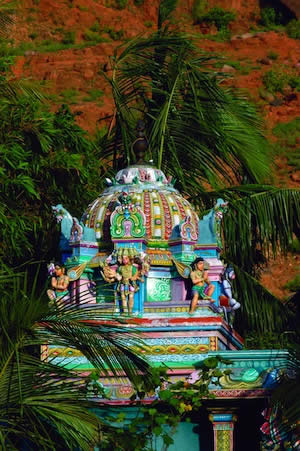 View from ashram of the Hanuman temple in the Penukonda village

Kaleshwar’s coming to Penukonda was predicted four hundred years ago when another powerful saint, Virabrahmhendra, sat at the mouth of one of the Yagantri caves and wrote an extraordinary manuscript: a detailed chronicle of future events called the Kalajnana, which is now considered a national treasure of India. It accurately predicted world events—in India and abroad—as well as the personal details of many individual’s lives. 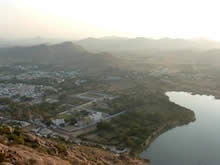 Panorama of ashram and Penukonda

One such account foretold the coming of a young man who would come like a diamond from stone, whose soul bore the energy of Mother Divine. He would come in our time — at the turn of this century — to bring extraordinary light and astonishing knowledge to the world. The Mother, Adishakti Parashakti, would accept his pujas (worship). She would listen and answer his prayers. He would be an incarnation of love with extraordinary power. Just having his darshan (see him) was enough in their lifetime. Those who believed in him would automatically receive the energy and power from him. He would spread the supernatural power channels to all the souls who were interested in learning them from him. He would bring the real Jivanmukti.