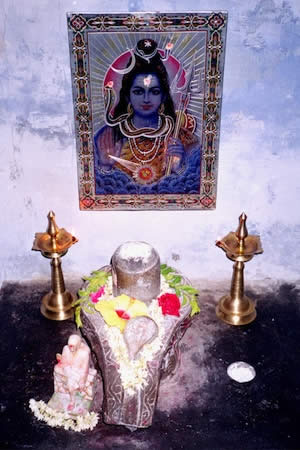 Inside the Shiva cave at the ashram 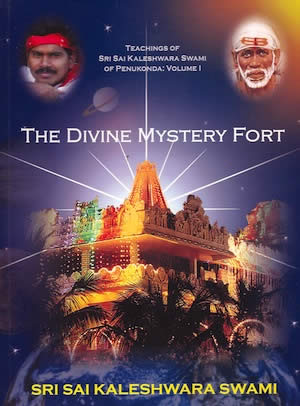 More details about Baba’s childhood are recorded in

The historic details of Shirdi Baba’s birth are unrecorded. The few facts which are known of Baba’s childhood come from his authorized biography, The Sri Sai Satcharita, and from Swami Kaleshwar.

Baba’s birth name and the names of his parents are undocumented. Baba’s parents were simple villagers—his father was a boatman and his mother, a devoted housewife. She was also known to be a great devotee of Shiva, praying that He would grant her wish and be born as her child. Even though the couple remained childless after many years of marriage, her devotion never waivered, and she persisted in her prayers for a divine son.

An Incarnation of Shiva

One day, while her husband was ferrying passengers across the river, a huge storm came. It was clear to the wife that her husband was in mortal danger. As she stood watching with tears in her eyes, Shiva appeared and asked, “What do you want?” She said, “You have to come in my life as my son.” Shiva gave her a fruit and told her to eat it. At the same time her husband returned safely to shore. She told him of her divine experience showing him Shiva’s fingerprints on the fruit as proof. The husband became jealous, his jealousy increasing when his wife became pregnant. Determined that he, too, should have direct experience of the Lord, he decided to leave his wife and go to the forest to live and meditate. However, his wife did not want to be separated from him. Leaving the child in their hut, she went with her husband into the forest where they lived out the remainder of their lives, “receiving enlightenment from Shiva”, Swami Kaleshwar said.

A Muslim couple from a nearby village found the child and adopted him. One day, the boy was playing with the son of the local Hindu priest. As part of their game, the priest’s son brought a Shiva Lingam from the temple. Upon seeing it the boy immediately put it in his mouth and gleefully swallowed it. All the Muslims were outraged at his actions, which they felt were blasphemy. The Hindus as well were so deeply upset at the loss of the lingam, their sacred symbol, that they were determined to cut open the boy’s stomach and retrieve it. Eventually everyone calmed down when the parents reminded them that he was adopted: they didn’t even know his birth name or whether he was actually a Hindu or a Muslim. Throughout the incident, the boy remained unconcerned. Soon after, he left home, taken by a fakir, who eventually brought the boy to the saint, Venkusa, who would become his master. In later years, Baba would freely quote from the sacred scriptures of both Islam and Hinduism. When asked whether he was in fact a Hindu or a Muslim he would reply, “The ways to God are many but God is one. Serve God. Serve each other. Love each other. This is God’s Way.” His life, from the very beginning, was a message to the world about the unity of all religions.

Baba stayed with Venkusa for 12 years. Because he received more attention from his master than the other disciples, the disciples became jealous and attempted to kill him by pummeling him with a brick. As the brick flew towards his head, Baba called out his master’s name and the brick miraculously stopped in mid-air thus Baba’s life was saved. Afterwards, the brick was given to Baba as a gift by Venkusa. It became Baba’s power object, which he used as a pillow and kept with him until the last days of his life.