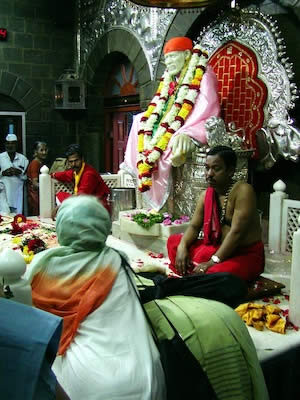 The holy statue of Shirdi Baba at his mahasamadhi 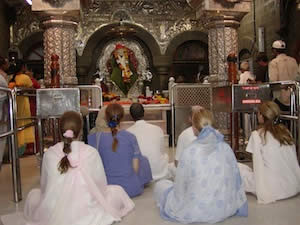 Students of Sri Kaleshwar at an early morning abishek in Shirdi

It is known that in his lifetime Baba traveled twice to the tiny village of Shirdi: his first visit lasted only a few months—where as a young man he lived under a fig tree at the edge of town prescribing healing herbs; his second ‘visit’ lasted over 50 years.

Early on during this second stay, Baba displayed many miraculous and healing powers. It was at this time that a local priest first named him “Sai” meaning “God-man, saint or Lord”. Thereafter, he became known as “Sai Baba” (revered saint) of Shirdi. Throughout those years, Baba took up residence in an abandoned, dilapidated mosque open to the elements. Much of his time was spent sitting by the fire pit, rain or shine, gazing into the flames, doing his spiritual work: uplifting the souls of all mankind. This simple dwelling became known as the Dwarkamai, which today is a holy shrine visited by millions each year. Baba’s samadhi, his tomb, is located there.

Shirdi Baba lived an outwardly simple life. He spent his days in Dwarkamai, visited by devotees, and each day went begging alms in town. Hundreds of miracles attributed to Baba during his lifetime are chronicled in more than a dozen books, some now available in the West. Thousands more have been attested to since he left his body in October of 1918. Around the world, where people have been healed and disasters averted; again and again Baba was subsequently identified as “the old man with the scarf on his head” who intervened. Many times, the people involved had never heard of Baba prior to “seeing” him at the scene; it was only later when introduced to a photograph or picture of him did they recognize him as the one who had helped them. Baba said, “If you look to me, I look to you. If you cast your burden on me, I shall bear it. If you seek my advice and help, it shall be given to you at once. Even after I leave my body, I shall come to the aid of my devotees.”

In Penukonda, a life-size murthi of Shirdi Baba sits facing east from within the Shiva Sai Mandir, the beautiful temple overlooking the gardens of Swami’s ashram. As their sadhana progresses it becomes clear to the students that Baba is there, a living presence, helping with each of their processes, guiding them along the path to spiritual mastery.

More details about Baba’s life in Shirdi are recorded in The Divine Mystery Fort, Volume I.