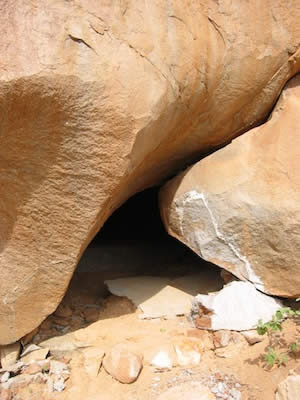 Cave where Sri Kaleshwar did sadhana

For the next decade, he practiced intense sadhana (spiritual processes) under the guidance of his master, Shirdi Baba. These practices were not for his own enlightenment or for the attainment of supernatural powers—these had already been attained in other lifetimes and were merely being reawakened. Instead he was testing the spiritual formulas written of in the ancient palm leaf books, formulas kept in secret by generations of saints, as the practices to be given to the world during this present age, the Kali yuga.

All along, he did his best to honor his parents’ wishes so he continued with school, reaching college where he majored in chemistry, biology and botany. However, Baba was a revolutionary character in Kaleshwar’s life. After meeting Baba his personal lifestyle completely changed. His spiritual pursuits clearly took precedent over everything else. More often than not, instead of studying he would do sadhana. He rarely attended classes, spending most of his time serving the needs of the ever-increasing numbers of devotees, solving their problems, offering healings and giving enlightenment. 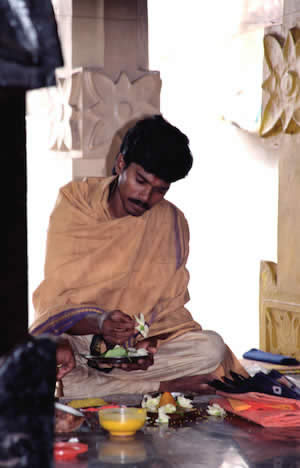 One day, when Kaleshwar was deeply absorbed in meditation, his father became so angry with him for not studying that he went upstairs to beat the boy. However, when he opened the door to Kaleshwar’s bedroom, he saw a huge tiger standing there. Kaleshwar had been communicating with Mother Divine in the form of the Goddess Durga. Unwittingly, his father became a witness to this supernatural event and had the blessing of a darshan of Her tiger. But, to a father and householder who ran a regulated, disciplined household, this was too much to bear. Deeply disturbed and unwilling to accept the path his son seemed determined to follow, he threw Kaleshwar out from the family’s home in hopes that he would come to his senses and return to a normal life. But, for Kaleshwar, this was a divine gift. He was free.

Resolutely, he traveled across India, visiting many powerful saints and power spots. During his sadhana he had numerous direct experiences about his own divine nature and the future of his spiritual mission. Eventually, his sadhana led him to settle in a small village in his native state of Andhra Pradesh…Penukonda. 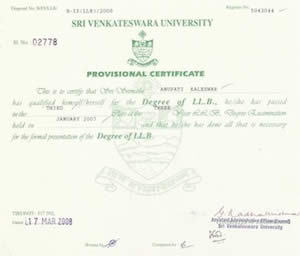 Although Kaleshwar spent many years focused on his spiritual sadhana, nevertheless he continued his educational studies. In 2008, Sri Kaleshwar completed his Bachelor of Law degree (Degree of LL.B.) at Sri Venkateswara University in Tirupati.

In 2007, Kaleshwar was conferred with a Doctor of Honors from the Open International University of Complementary Medicine in recognition of his humanitarian works in India. During the awards ceremony in Kuala Lampur, Dr. Kaleshwar’s achievements were singled out by the Chairman of the University who said, “Service is the highest station man can achieve. The people who receive this award have dedicated and sacrificed their lives for the sake of mankind and have done wonders in the world.” Previous recipients of this award have been Nelson Mandela and former Prime Minister of Pakistan, Shaukat Aziz.

Sri Krishnadevaraya University honored Dr. Kaleshwar in 2008 with a dcotorate for his great social work towards the welfare of the poor.