Kaleshwar at 7 years old visiting a temple with his family

Kaleshwar Anupati was born just before dawn on Tuesday, the 8th of January 1973, in the township of Madhavaram, Cuddapah District, in the state of Andhra Pradesh in southern India. His father, Subaraiyadu, a respected professor, and his mother, Subbamma, a devoted housewife, raised their son, his elder brother and three sisters in the Hindu tradition. In almost all respects, they were a typical Indian family. Except for their middle child. From the start, Kaleshwar was clearly different.

Miracles occurred around him: once his grandfather observed the divine appearance of the Goddess Saraswati standing guard over him while he slept. 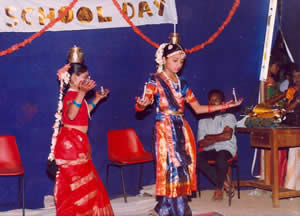 Shilpa dancing during a school function 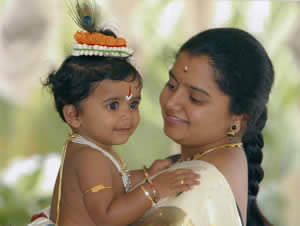 Kaleshwar did not speak for the first seven years of his life and would often accept only a single drop of water as his daily sustenance. When asked years later the reason for this unusual behavior, he said, simply, that he was absorbing cosmic energy. Miracles occurred around him: once his grandfather observed the divine appearance of the Goddess Saraswati standing guard over him while he slept; another time, it was a king cobra, its mantel spread, that shaded him as he napped soundly on the ground in the backyard at his grandfather’s farm.

Kaleshwar really enjoyed his time with his grandfather, who was a wealthy landowner and master fisherman. Kaleshwar would sometimes go fishing with him and help pull in the nets. However, he felt sorry for the fish and would throw them back whenever he could. Even as a child he showed an extraordinary compassion for all things.

While his saintly grandfather knew of Kaleshwar’s extraordinary destiny and accepted the divine occurrences which were a growing part of his grandson’s life, Kaleshwar’s parents were greatly concerned. The life of a spiritual aspirant—a life of sacrifice and renunciation far removed from the close-knit ties of family life—was not what his parents wanted for him. They wanted him to be a doctor or lawyer and a productive and respected member of the community like his father. Happily for his parents, as the adolescent became a young teenager he displayed all the signs of fulfilling their dreams: he excelled at school, was popular and well liked and expressed no interest in seeking after God. The family’s anxieties appeared unwarranted. And then, Shirdi Baba appeared.